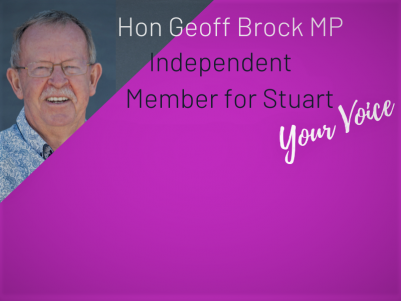 Geoff was born in Frankston Victoria and is the eldest of seven children.

His father was a rabbit trapper and when he was six months old, his family moved to Redhill in South Australia, then to Wandearah South Australia where he went to the Wandearah North School, Pirie East School, both schools being 1 Classroom, 1 Teacher, 7 Grades then to Risdon Park Primary for Year 7 and then Port Pirie High for his Secondary schooling

Geoff worked for BP Australia being their Northern Manager for South Australia, this Territory being the largest BP Territory in the world at that time, with Geoff being on the road for 2 weeks at a time several times a year.

Geoff then went into private business, operating in partnership a Roadhouse at Port Augusta before returning to Port Pirie with his late wife Arlene and 2 children in 1978.

Geoff then commenced work at the Broken Hill Associated Smelters (now Nyrstar) starting in the Day Gangs, before working through the ranks to Managing Contracts, with 15 various Contracting Firms up until his ‘retirement’ in 2008.

He used the term retirement loosely as he stepped across to take on his Mayoral responsibilities which he was elected to in 2003 and decided at this time to concentrate solely on this role as Mayor of Port Pirie and Region.

Geoff’s involvement in Local Government for 20 years, 6 of which he served as Mayor for the Port Pirie Regional Council, has put him in good stead to be the elected Member for Frome.

With the Seat of Frome becoming vacant in 2009 and with the retirement of Rob Kerin, a previous Premier of the State, Geoff elected to contest the Seat with him being successful at the Bi Election

His subsequent win for the seat at the general election in March 2010 following the by-election in January 2009 validates the confidence and trust his community has in him.

Always approachable and happy to assist, Geoff has given and continues to give to his community and Regional South Australia in so many capacities. The motto he and his team have embraced is that they ‘have the care factor!’

No issue is too big or too small for Geoff and his staff to pursue. They don’t openly celebrate their successes but often reflect on the fruits of their labour in working tirelessly for their constituents.

Geoff was also successful in getting a Parliamentary Enquiry into Bullying and Harassment by the States Courts Administrative Authority to Sheriff Officers working under their delegation.

Geoff is a Patron of several clubs throughout the Electorate, a Freemason and is a past President (still member) of the Rotary Club of Port Pirie.

Geoff was reelected as the MP for Stuart in the 2022 State Elections.